Grandmother Snow despite her frail appearance is one of the best trappers at the Okinja Lodge. She is 376 years old and has learned a lot of tricks in her time. In fact she was the one who developed the tactic of trapping dragons in their human form. As a Kitsune she was familiar with shapeshiting magic and she developed a spell that could hold a creature in it's current from for a period of time. Her approach to dealing with problematic dragons almost never involves killing them and she instead prefers to persuade, negotiate, and listen. If they can't be reasoned with then she will result to tricks and deception. Just because she doesn't use an aggressive approach doesn't mean she isn't capable of defending herself. She is a powerful spell caster though that is something she likes to keep to herself unless needed. She is known as "grandmother" since she teaches the new recruits to the lodge and treats everyone as if they where her own children. ________________________________________________________

Resin Miniatures: Our resin miniatures are printed at a resolution of .04. and maintained high details with little to no marks. We spend tons of time building custom supports to make the highest quality minis as much as possible.

Mini came packed well and in good condition, which I was honestly really impressed with since the dagger in her hand is so thin and fragile looking.

Both big and small that I got of this mini came super clean and ready to paint.

This figure is the most adorable thing. I decided to leave her in her original form for the picture. But she’s my favorite mini so far.❤️ 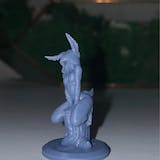 Very detailed miniature has a few spots that are a little thin at this scale. I'm going to have to be very careful painting it. Required a little bit of clean up to remove some residual supports. Looking forward to painting. 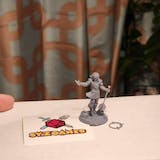