Almost nothing is known about the enigmatic Delphine. She simply showed up one day claiming that she foresaw she was needed at the lodge. At fist they thought she was another hopeful trying to use some gimmick to get accepted as a trapper until she started spouting embarrassing information about the lodge members that was impossible for her to have known. Despite being blind Delphine acts as the eyes for trapper parties earning her the name The Oracle. She can see dragon attacks moments before they happen in far off places giving them a head start to mobilize and reach the attack. In addition to being able to foresee events she is also a powerful spell caster drawing upon the power of the gods to smite down evil doing dragons. She has been with the lodge for decades though never seemed to aspire to become a veteran rank and also doesn't seem to have aged. Some speculate that she is a god herself in mortal form, other say she is actually a dragon cursed to reside as a human. Perhaps one day the truth will be made known.

Resin Miniatures: Our resin miniatures are printed at a resolution of .04. and maintained high-details with little to none marks. We spend tons of time to build the custom supports to make the highest quality minis as much as possible.

Perfect quality, exactly as pictured, and packaged nice and securely too. Absolutely fantastic!

Great mystery box. High quality minis. I ended up getting some figures I've been wanting for a while, thanks! 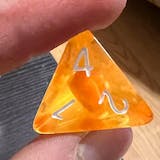