Glade is a Spirit Sika, They are the lesser cousins of the Kirin though still powerful and graceful. On one expedition to handle a difficult River Dragon that had been causing trouble, their party was stopped by a Spirit Sika that was blocking their way through a glade. There seemed to be no apparent reason why it would not let them pass other than to be belligerent. One of the party members attempted to get it to leave but he ended up flat on his back as a result. Before things could escalate Grandmother Snow stepped forward and scolded the Spirit Sika like you would a naughty child. The deer seemed stunned at the assertive little Kitsune and let them pass. Glade would follow them from a distance curious about what they were doing. In the Village, they were staying in the Spirit Sika charged in plowing into an old man but before he could be scolded again Grandmother Snow realized why. Spirit Sika are known for their ability to see the true form of creatures and this old man had been the River Dragon they had been seeking. Snow named the deer Glade after the place they had found him and he followed them back to the lodge. Now snow and Glade are inseparable.

Resin Miniatures: Our resin miniatures are printed at a resolution of .04. and maintained high details with little to no marks. We spend tons of time building the custom supports to make the highest quality minis as much as possible.

Great print! Thanks very much!

Want paint something large? This is a MUST have!

Bartiar, Horror from the Deep 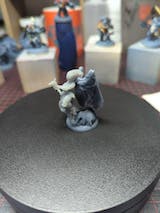